Here is everything you need to know about Walt Disney World’s Magic Kingdom’s Pirates of the Caribbean ride including history, fun facts, photos and more. I hope you find this listing informative and helpful!

Pirates of the Caribbean Description 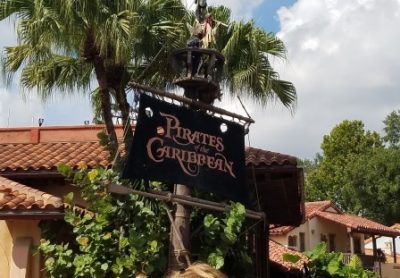 Wander a meanderin’ alleyway within a Spanish fortress and board a small barge for a spellbinding high-seas adventure. Escape through a shadowy grotto past the ghostly catacombs of fallen pirates and swoop down a small rushing waterfall—your passageway to the Golden Age of Piracy.

Behold boisterous buccaneers drunk on the spoils of plunderin’ during a 9-minute cruise amid the Old World. Sing along as windswept pirates serenade you with their classic anthem, “Yo Ho, Yo Ho (A Pirate’s Life for Me).” And even spy a sly Captain Jack Sparrow from The Pirates of the Caribbean film series along the way!

If Ye Be Seekin’ Adventure…
Take off on a treacherous voyage to the 17th century, when rowdy rogues and rapscallions ruled seaport towns along the Spanish Main under the watchful eye of “Jolly Roger.”

Popular sites you will encounter include:

Pirates of the Caribbean Fun Facts


Pirates of the Caribbean Details