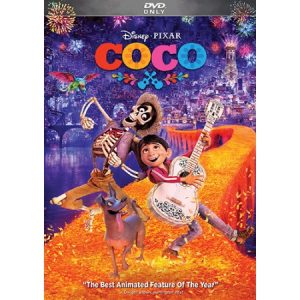 Disney/Pixar has announced that their Golden Globe-winning animated hit Coco, will be released on Digital & Movies Anywhere February 13th, Blu-ray on February 27th. The Coco Blu-Ray can be pre-ordered from Walmart here. (affiliate link)

There was no date given yet for Coco’s streaming release on Netflix, but it will presumably be on the video-streaming service a few months after the Blu-Ray is released.

Here is a quick rundown of the plot:

In DisneyPixars vibrant tale of family, fun and adventure, an aspiring young musician named Miguel (voice of newcomer Anthony Gonzalez) embarks on an extraordinary journey to the magical land of his ancestors. There, the charming trickster Hctor (voice of Gael Garcia Bernal) becomes an unexpected friend who helps Miguel uncover the mysteries behind his familys stories and traditions.

and here is a quick sneak peek at the Coco digital release:

In this world and the next, family is forever. Golden Globe winner #PixarCoco comes to digital & Movies Anywhere Feb. 13 and Blu-ray Feb. 27. Pre-order: https://t.co/imaNz87QXf pic.twitter.com/nMmknwUm84