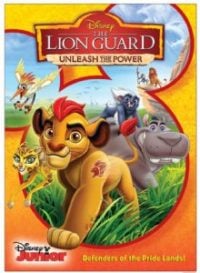 Join Kion, second born cub of Simba and Nala, as he takes on the leadership of the Lion Guard and assembles of the best and brightest who will help maintain the Prideland and keep the circle of life intact. Kion gathers not a team of lions, as tradition has dictated, but his own team of the Pride Lands’ fiercest, bravest, strongest, fastest, and keenest of sight. But Kion himself must learn the power of his roar before a genuine and lasting peace can come to the Pridelands.