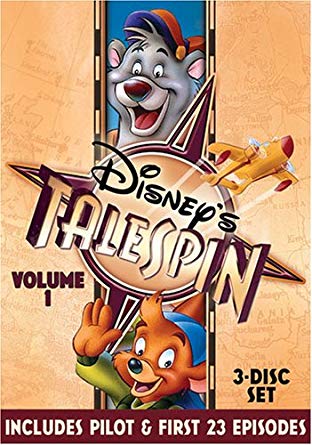 TaleSpin was a popular Disney Afternoon children’s show that ran from 1990-1991. It’s main characters were based on those in the Disney animated classic The Jungle Book.

Happy-go-lucky pilot Baloo and his faithful navigator Kit Cloudkicker form the intrepid flight crew, “Higher For Hire.” There’s excitement at every turn as the heroes face off against the devious Shere Khan, Colonel Spigot and Don Karnage’s band of evil Air Pirates, with only Baloo’s skills and Kit’s wits to save them. (source)