Here is everything you need to know about the amazing Disney series Under the Sea: A Descendants Story including casting, episodes, fun facts and more. I hope you find this listing informative and helpful!

Under the Sea: A Descendants Story Description 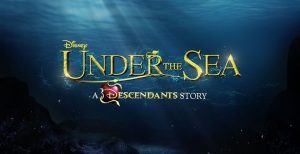 “Descendants” arch-nemeses Mal and Uma will face-off in an epic underwater showdown when “Under the Sea: A Descendants Story” premieres FRIDAY, SEPTEMBER 28 (7:50-8:00 p.m. EDT/PDT), on Disney Channel.

In the story, Mal emerges from the shadows of a mystical forest onto a dark coastline where she crosses paths with Dizzy, played by Anna Cathcart. “Descendants 2” stars Thomas Doherty and Dylan Playfair will appear in their roles of Harry and Gil, respectively, as part of Uma’s wicked pirate gang.


Under the Sea: A Descendants Story Details

Under the Sea: A Descendants Story Trailer: