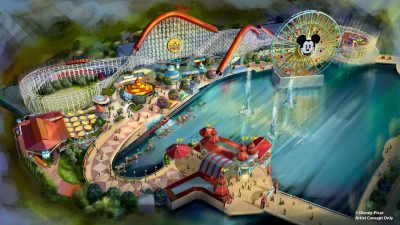 Swoop, swirl, dip and curl in and around Pixar Pier with the epic Parr family!

Back in the town of Metroville… the local townspeople are dedicating their beloved roller coaster to the Incredibles as a symbol of gratitude for all their heroic efforts. Our honorees are thrilled to attend the inaugural “Incredicoaster” launch, accompanied by iconic super-suit designer Edna Mode, who’s graciously agreed to watch Jack-Jack. But things go awry when the unpredictable baby escapes from Edna’s not-so-watchful eye.

Jack-Jack manifests various superpowers while teleporting from tunnel to tunnel, causing chaos along the way. His family sprints into action to save the day and, just when they think they’ve got a handle on things, he disappears all over again!

Join the Incredibles in their mad dash to catch baby Jack-Jack as he wreaks havoc throughout every inch of this high-speed chase! (source)