Here is everything you need to know about Walt Disney World’s Hollywood Studios’ Voyage of the Little Mermaid show including history, fun facts, photos and more. I hope you find this listing informative and helpful!

Voyage of the Little Mermaid Description 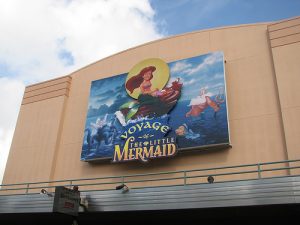 Enter a world where the ocean floor is full of fish and Ariel longs to stroll and dance with humans. Follow her adventures as the show recreates selections from the Disney animated classic, using large and colorful puppets, live performers, special effects and movie clips.

Some of your favorite characters from the film sing select songs from the award-winning soundtrack. Sebastian the calypso-ing crab opens the show with a splash as he croons “Under the Sea.” Sway with him as he sings alongside a happy chorus of dancing fish and pink snails.

Ariel longs for a world out of reach in “Part of Your World.” Someone hears her plea—unfortunately, it’s Ursula the sea witch. Feel the chill when Ursula reveals her terrible solution to Ariel’s problem in the catchy and cautionary “Poor Unfortunate Souls”—and the warmth when Ariel wins back all she’s lost. (source)


Voyage of the Little Mermaid Details