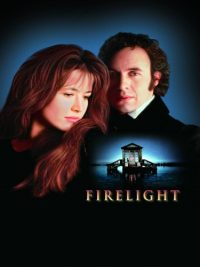 In 1838 a beautiful Swiss governess and an English landowner, meet for three days to satisfy the terms of a secret business agreement. He will give her money to pay her father’s debts and in return she will give him a child. The powerful desires awakened by this brief encounter draw them together seven years later when, without his knowledge and in his absence, she is hired as the governess to their daughter. Forced together under the same roof and held apart by the conventions of the time, they are freed only in the magic of the firelight.