Here is everything you need to know about Walt Disney World’s Magic Kingdom’s extinct Main Street Electrical Parade including history, fun facts, photos and more. I hope you find this listing informative and helpful! 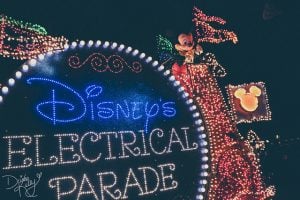 The Main Street Electrical Parade was a classic Disney parade which alternated between various Disney parks for the better part of a 45 year run. The parade featured floats and performers covered in hundreds of thousands of lights, which made for an amazing sight at night. The Disney World version of the parade had three runs: 1977-1991, 1999-2001 and 2010-2016. The parade was replaced by the same parade, SpectroMagic, after both of the first two runs and was not replaced at all (so far) after the third. It is unclear if the parade will ever return to Disney World or if it is permanently retired.