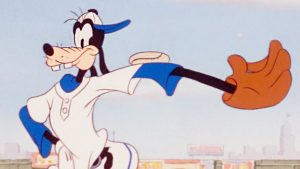 Goofy is a cartoon character created by Art Babbitt and Frank Webb for Walt Disney Productions in 1932. He is a tall, anthropomorphic dog with a Southern drawl and typically wears a red or green vest, white gloves, and a tall hat. Goofy is known for his clumsy and accident-prone nature, but also for his good-heartedness and loyalty as a friend. He is a close friend of Mickey Mouse and Donald Duck and has appeared in various forms of media, including films, television shows, and comic books. He is also a popular subject in Disney merchandise. Goofy first appeared in the short “Mickey’s Revue” in 1932, and then in “Goofy and Wilbur” a 1939 short.

Here is the Internet’s largest collection of Goofy-related movies, TV shows, toys and other products. As always, new pieces are added to this collection regularly. MagicBand+ lets you engage with Disney moments like never before as it reacts to select park interactions with lighting effects and gesture recognition. Make your…

The Most Magical Place on Earth will be making warm memories long after its 50th Anniversary with this dramatic tie-dye Spirit Jersey! The Walt Disney…

Make the season merry and bright when accenting your home décor with this festive throw pillow featuring Mickey and the gang plus ”Happy Holidays” greeting….

Deck the halls with Mickey and the gang and this glittering set of five sculpted ornaments celebrating the season. Mickey, Minnie, Donald, Daisy, and Goofy…