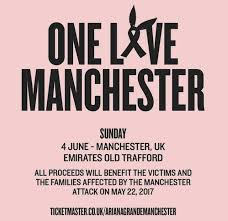 It was just announced that Disney will air Ariana Grande’s massive “One Love Manchester”  concert on Sunday. The concert, which will air globally, will be an all-star benefit concert to aid victims of the bombing attack at Grande’s previous Manchester, England concert two weeks ago.

The concert will feature acts such as Katy Perry, Justin Bieber, Miley Cyrus, the Black Eyed Peas, Robbie Williams, Pharrell Williams, Take That, Coldplay and others. All proceeds from the concert will go to an emergency fund established jointly by the city of Manchester and the British Red Cross.

The concert will air on Freeform live  at 2pm EST on Sunday and a concert highlight special will air on ABC following the NBA Finals game.