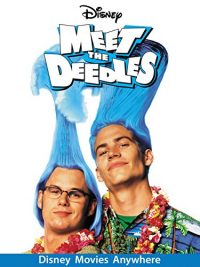 In the Disney film Meet the Deedles, laughter is taken to the “X-Treme” when Hawaiian surf dudes Phil and Stew Deedle are mistaken for Park Ranger recruits in this high-energy comedy. Though these two brothers are ready for any sports challenge from skateboarding to rock-climbing, even their daredevil attitude will be put to the test by Frank Slater (Dennis Hopper), a demented ex-Park Ranger who is living in an underground grotto and plotting a fiendish revenge against the park service that fired him years before. Can these clueless brothers stop Slater from carrying out his plan to steal Yellowstone’s most famous landmark, Old Faithful?