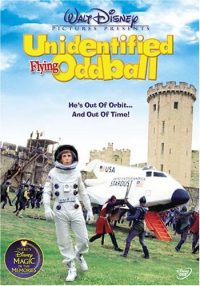 In Disney’s Unidentified Flying Oddball , astronaut Tom Trimble and his robot companion are unexpectedly hurled backward in time during a routine space flight and end up prisoners at the Court of King Arthur in sixth-century England! Adding to Tom’s plight is his discovery of a sinister plot to overthrow the King, with the outcome resting on the flash-and-dazzle of the equipment at hand – from the 20th century!