While the infamous “spaghetti maps” don’t exactly agree on a path for hurricane Irma, most have them causing some impact to central Florida and Walt Disney World. A lot can change between now and next weekend, when Irma is likely to reach the US, but just in case, I’ve opened up this post. Much like I did last year for Hurricane Matthew, I will be adding info to this page as often as Disney releases info on Irma prep along with periodic weather updates from the National Hurricane Center.

Please Note: I am not a weather expert and in no way do I speak for Disney or any of their properties. I am just a fan trying to be helpful by collecting all of the various developments regarding Hurricane Irma and its impact on the Walt Disney World Resort as they happen and posting them in one spot.

Updated Track of Hurricane Irma and Its Impact on the Walt Disney World Area:

Here is the latest track for Hurricane Irma as of Sunday, September 10th at 2am AST. This is a 5-day projection of where NOAA expects Irma to travel. As you can see, the track of the storm has shifted even more to the west and now projects it to hug the west coast of Florida with the Orlando are slated to see the worst of the storm late Sunday/early Monday. Over the past few days, we have definitely seen the WDW area slip more and more to the outskirts of the storm’s path as it has continued to shift westward. The storm has picked up a bit and is currently a category 4 and its max winds have dipped from a peak of around 187 mph to around 130, but it is still projected to bring 100+ mph wind to central Florida along with a great deal of rain. In fact, Weather.com currently places the Orlando area in the 8-12 inches of rain by Tuesday zone. 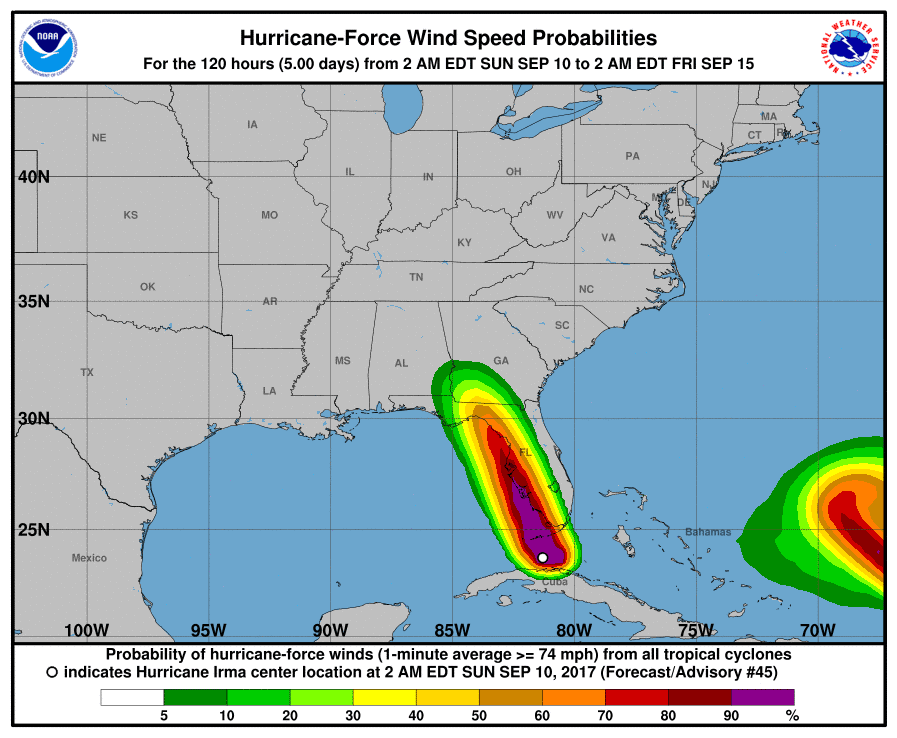 Of, course, this is all speculation, and anyone remotely close to the track of this storm should be prepared and stay tuned to your local meteorologists.

In case Irma has impacted your vacation plans, or if you are planning a trip to Disney World soon and are not sure how a hurricane will impact your stay, here is a handy frequently asked questions page that Disney has created about hurricanes and their impact on Disney World vacation planning.

Update 9/5/17: Southwest Airlines has issued a travel advisory in anticipation of Irma, offering free rebooking to many Florida airports for travelers with reservations from Sept 5th to 11th. More info here.

Update 9/5/17 (#2): Florida Governor Rick Scott has announced that, as of 5pm today, all Florida tolls will be suspended until further notice to keep traffic flowing during evacuations. More info on the toll suspension can be found here.

Update 9/6/17: Disney has announced the closure of Blizzard Beach and Disney Springs’ balloon ride Aerophile (Characters in Flight) in anticipation of the inclement weather. Aerophile is closed immediately until TBD and Blizzard Beach will be closed September 8 & 9.

Update 9/7/17: Disney has set up this page on the Disney World website regarding information about hurricane Irma. There is also a live chat on the page for visitors that have specific questions about the storm’s impact on their vacation plans.

and here is the statement Disney is splashing on some of their Disney World attraction pages:

Walt Disney World Resort is operating under normal conditions and continues to monitor the path of Hurricane Irma. For more information,
review frequently asked questions regarding our hurricane policy.

Update 9/7/17 (#2): Now we are starting to see the Disney World cancellations occurring more steadily as Irma gets closer to Florida. Here are the most recent closures and cancellations.

Update 9/8/17: A few developments from this morning as Irma pushes closer to the Sunshine State….

Update 9/8/17 (#2): OK folks, what has seemed to become more and more inevitable with every new forecast is now official…Walt Disney World Resort is CLOSED Sunday, September 10 and Monday, September 11, 2017 with normal operations resuming on Tuesday. Resort hotels will remain open throughout the weekend. This move just amplifies the severity of the storm as this is only the fifth time in history that Disney World has closed.

A few other updates that Disney announced this afternoon:

Update 9/10/17: Ever wonder what it is like to be in Walt Disney World with a hurricane hours away? Our friends at Resorttv1 live streamed from the Magic Kingdom last night before its early closing. This is, by far, the quietest I have ever seen the park.

Update 9/11/17: Well, Irma has passed through Florida and, despite a real scare when the storm took an unexpected right turn and moved more inland towards Orlando, Disney World held up with just downed trees and some flooding. Considering how other parts of the state fared, it looks like Disney lucked out.

Update 9/12/17: The four Disney Parks are open for business today. There are a few attractions at the Magic Kingdom not opening such as the Jungle Cruise, the Walt Disney World Railroad and the Riverboat, all due to debris cleanup. Splash Mountain is also not open, but that is for a scheduled refurbishment rather than storm damage. At Animal Kingdom, where there are the most trees of all the parks, Planet Watch, Kali River Rapid ride and the Gorilla Falls Exploration Trail are still closed.

Updated 9/14/17: As tree and debris cleanup continues at WDW, there are a few more developments today worth noting:

“We anticipate that Disney’s Fort Wilderness Resort & Campground will reopen next week, but it remains closed at this time as we clean up the property following the storm.”

Update 9/16/17: Typhoon Lagoon has officially re-opened, so now all of Disney World’s parks are operational for the first time since Irma made landfall.

Be the first to comment on "Hurricane Irma’s Impact on Disney World: What You Need to Know"