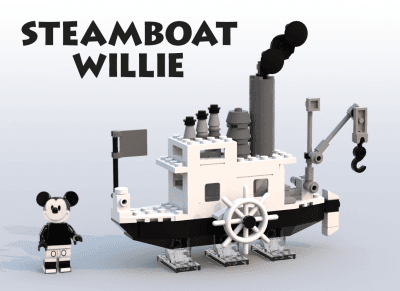 A fan-submitted Steamboat Willie LEGO set recently crossed one of the most difficult challenges on the road to becoming a real set. The set concept, submitted by user szabomate90, achieved 10,000 votes of support on the LEGO Ideas platform on July 24th. This sent it into the official review phase.

If approved, the Steamboat Willie LEGO set would join Wall-E and Tron Legacy Light Cycle as Disney sets created based on fan submissions. Of course, it could end up like Elsa’s Ice Palace or the Nautilus from 20,000 Leagues Under the Sea as sets that reached 10,000 votes only to be rejected by LEGO.

Time will tell what the fate of this set will be. I will be sure to update this post once any announcement is made on its fate.