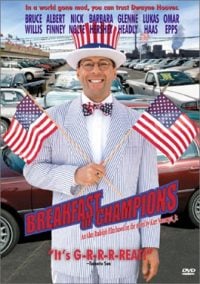 Superstar Bruce Willis (THE SIXTH SENSE) stars in this critically acclaimed, offbeat comedy about a man who’s having a hard time getting a grip on his life! A millionaire car salesman who runs the biggest dealership in Midland City, Dwayne Hoover (Willis) is a celebrity, loved and trusted by everyone. Then one day, he wakes up and realizes that his life is a total mess! But between the headaches posed by his pill-popping wife (Barbara Hershey — FALLING DOWN), a mistress (Glenne Headly — MR. HOLLAND’S OPUS) who won’t leave him alone, and a cross-dressing sales manager (Nick Nolte — THE THIN RED LINE), Dwayne has picked a bad week for a midlife crisis! Based on the best-selling novel by Kurt Vonnegut Jr., this hilarious comedy and its incredible all-star cast will keep you laughing as Dwayne tries to keep from losing his mind!