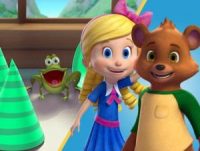 This fairytale-inspired animated series chronicles the adventures of newfound best friends Goldie and Bear, following the renowned porridge incident of “Goldilocks and The Three Bears,” picking up where the story left off after Goldie has apologized. Set in the Fairy Tale Forest, the series follows plucky Goldie and rough-and-tumble Bear as they encounter well-known characters from fairy tales, folk tales and nursery rhymes, including Little Red Riding Hood, Humpty Dumpty and the Three Little Pigs. Each episode features two 11-minute stories that showcase the new, unexpected friendship between Goldie and Bear as they seek out fun and adventure along with their magical friends and neighbors. (source)