Here is everything you need to know about the amazing Touchstone movie Feast of July including casting, reviews, fun facts and more. I hope you find this listing informative and helpful! 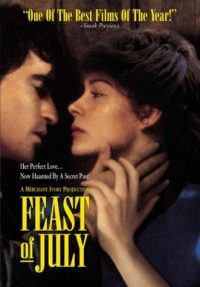 A compelling tale of passion’s dark secrets – critics applauded Feast of July as one of the best films of the year! A mysterious young beauty, Bella Ford (Embeth Davidtz, Army of Darkness), searches hopelessly for the lover who betrayed her. Weary and alone, she is offered shelter by the Wainwright family, who help her find new hope… and whose three handsome sons battle for her affections. But just as she is ready to begin her new life, her former lover unexpectedly reappears to haunt her with the secrets – of their past. From Merchant Ivory Productions, the award-winning creators of Howards End and The Remains of the Day – Feast of July is passionate and powerful entertainment. Directed by TV veteran Christopher Menaul (Prime Suspect) and co-starring Ben Chaplin (The Thin Red Line). (source)