Phil of the Future (Disney Channel) 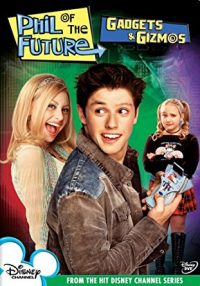 Phil is just your average teenager — whose family crash-landed here from the year 2121. His adventures are out of this world, his futuristic gadgets are definitely outrageous, and his life is totally cool. So will he ever want to go back to the future? When Phil and his sister Pim are bothered by bullies, a dose of the “Invisi-Spray” makes their problems almost disappear. Next, Keely uses the “New-Ager” to see what she would look like at 25. But when a teacher mistakenly asks her out, Phil ages himself to play her older boyfriend and accidentally ages 60 years. Later, Phil thinks big when he gets small with the “Shrink Ray” to help Kelly overcome her stage fright. And in an all-new episode, a friend from the future (Orlando Brown, THAT’S SO RAVEN) offers the Diffys a ride home. But when Phil refuses to go along with his friend’s pranks, will his friend blast off without them? (source)