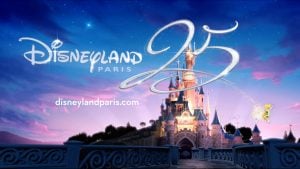 When Euro Disney first opened on April 12, 1992, it faced a great deal of challenge and controversy. Between the cultural protests, labor clashes and financial struggles, the park’s early years were a bumpy road, to say the least. Fast-forward 25 years and we now see a park with a new name, Disneyland Paris, a much better financial situation and a healthy level of traffic (roughly 15 million visitors annually).

Always looking for a reason to celebrate, Disney has quite a few special events and festivities scheduled over the coming months to celebrate Disneyland Paris’ 25th anniversary. If you are planning a trip to Disneyland Paris this year, be sure to check out this post from the Disney Parks blog, which spotlights the new attractions and events in store for their 25th.