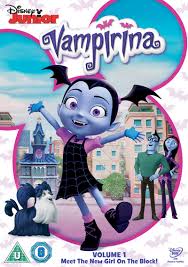 Set in an urban Pennsylvania neighborhood, this music-filled animated series introduces a young vampire girl, Vampirina (aka Vee), who’s just landed as the new kid in town after her family relocates from Transylvania. Vee faces the trials and tribulations of adjusting to unfamiliar surroundings and new human friends at school, but as she learns about them and vice versa, she ultimately comes to appreciate her unique individuality and her friends’, too.

The series’ story curriculum includes lessons about self-identity and consideration of others. Each episode features two 11-minute stories and includes original songs.

Naturally curious and upbeat, Vee isn’t much of the “blend in type.” She has a strong sense of self and realizes that while it may be easier to adapt to fit in with her peers, she doesn’t want to change to meet the expectations of others. With a little help from her family and her best friends, Poppy and Bridget, Vee will learn to celebrate the traits that make her unique.

Vee’s parents, Boris and Oxana Hauntley, are the proprietors of the local Scare B&B, a bed and breakfast for visiting ghouls and goblins. Though homesick for Transylvania, Oxana embraces her new role as B&B owner and is a calming presence for Vee in their new world. Boris has a zest for his new surroundings and is always on the lookout for the latest human trend to share with his wife and daughter.

Also along for the adventure is the Hauntley’s dog, Wolfie, who secretly has the ability to turn into a werewolf; a playful ghost named Demi, who has traveled with the family from Transylvania; and Vee’s cantankerous yet loyal gargoyle sidekick, Gregoria.

Additional characters include Poppy’s twin brother, Edgar, an aspiring filmmaker who’s obsessed with all things spooky and out of the ordinary; Poppy and Edgar’s mom, Edna, who has a sneaking suspicion that there’s something different about the Hauntleys; Vee’s school teacher, Mr. Gore; and Chef Remy Bones, the Scare B&B’s resident skeleton chef. Vee’s grandparents, Nanpire and Grandpop, also show up from time to time to check in on their family and learn about their new human traditions. (source)