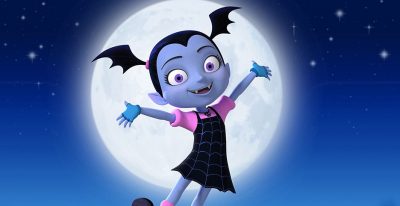 Disney announced today that their latest Disney Junior animated show, Vampirina, has been renewed for a second season. The show made its Disney TV debut on October 1st and was an immediate hit with viewers.

For those who have not watched Vampirina yet, here is a quick synopsis of the show (source):

“Set in a Pennsylvania neighborhood, the series stars Lauren Graham, James Van Der Beek and Isabella Crovetti as the Hauntley family, friendly vampires who have recently moved from their home in Transylvania. The stories follow Vampirina (aka “Vee”) as she faces the joys and trials of being the new kid in town including making friends and attending a new school in the human world. Along the way, Vee learns that it may be easier to blend in with her peers, but it’s more valuable to celebrate the qualities that make each individual unique.”

According to Disney,  to-date, Vampirina has delivered over 90 million views across Disney apps, VOD, social media and YouTube platforms. Globally, the series has reached over 49 million total viewers and ranks #1 among key young kid demos in the U.K. and Italy. The series is available in 115 countries and 15 languages.