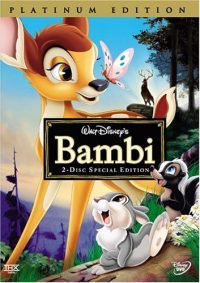 In the heart of the forest, Bambi takes his first wobbly steps and sets out to explore his new world with his friends: a lovable rabbit called Thumper and a bashful skunk named Flower. Their adventures together include skating on “stiff” water, frolicking through the woods and getting acquainted with all the other intriguing inhabitants of the forest. But that is only part of the story. Guided by the wise Friend Owl, the young prince also learns valuable lessons about love, loss, and life.