Here is everything you need to know about Walt Disney World’s Epcot’s Soarin’ Around the World ride including history, fun facts, photos and more. I hope you find this listing informative and helpful! 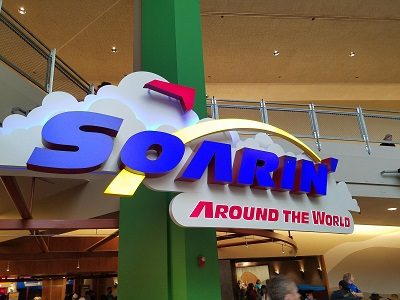 Take flight on a breezy, airborne adventure as you hang glide above some of the most breathtaking wonders the world has to offer.

Depart on an all-new journey through the sky, flying high from one extraordinary landmark to the next. It’s Soarin’ Around the World!

An Exhilarating International Adventure
Through the bright lights and glowing halls of a newly designed concourse awaits a tour like no other. Passengers, prepare for liftoff—you’re about to visit some of the planet’s most awe-inspiring destinations!

No mountain is too high. No landscape is too far. Whether you’re soaring above man-made marvels like the majestic Great Wall of China, cruising over natural sights like Iguazu Falls in South America or swooping past sailboats on Australia’s spectacular Sydney Harbour, this is your chance to experience the joy of hang gliding as you never have before.

So get ready—and strap yourselves in for this epic re-imagining of a beloved Future World attraction!

Live the Dream of Flying
In the grand Disney tradition, Imagineers pulled out all the stops to make fantasy reality, bringing the feeling of flight to life using a 180-degree, 80-foot IMAX projection dome and aerially captured footage that simulates the graceful motion of a hang glider.

Spectacular new digital projection technology lifts the sensation to new heights of brilliance. Thrill as you’re raised 40 feet in the air, engulfed in the stunning panoramas and swept from one scenic locale to the next!