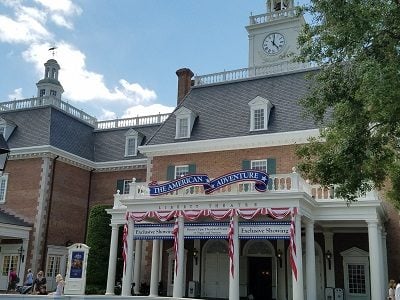 Audio-Animatronics, film and music bring America’s past to life during this 30-minute show at the American Adventure Pavilion.

Benjamin Franklin and Mark Twain are your guides on this inspiring journey through our young nation’s short, but storied history. Join them atop the Statue of Liberty’s torch as they salute America’s greatest resource: its people.

Twelve faux marble statues, 6 on either side of the 72-foot screen, embody the American ideals of Individualism, Innovation, Independence, Self-Reliance and more. Watch and see how these ideals precipitated key events like the landing of the Mayflower, the Boston Tea Party, the winter at Valley Forge, the penning of the Declaration of Independence, the Civil War, industrialization and the Great Depression. Along the way, you’ll also meet such luminaries as: