Here is everything you need to know about the amazing Woody’s Lunch Box restaurant at Walt Disney World’s Disney’s Hollywood Studios including history, reviews, fun facts, photos and more. I hope you find this listing informative and helpful! 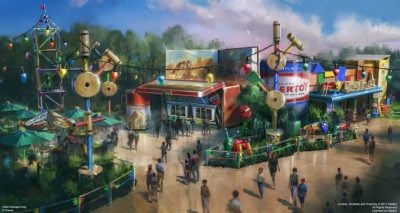 Lasso your hunger with a meal from Woody’s Lunch Box! During your upcoming Toy Story Land adventures, be sure to drop by this food stop for a toy-riffic meal. Dishing out all sorts of tasty treats for “honorary toys,” Woody’s Lunch Box features classic American fare, old-fashioned soda floats and other Toy Story-themed specialties.

Here are the details of Woody’s Lunch Box and the Mini Babybel partnership from the Disney announcement:

Mini Babybel®, the creamy, red-wax-wrapped cheese, has been named the Official Snack Cheese of Walt Disney World Resort in Florida, the Disneyland Resort in California and Disney Cruise Line. This announcement kicks off a multi-year strategic alliance between the two family-focused brands.

As part of the alliance, Mini Babybel will be prominently featured at a quick-service window within the new Toy Story Land scheduled to open in 2018 at Disney’s Hollywood Studios in Florida. Because even toys need a bite or two every now and again, Andy has taken a vintage Woody-themed lunch box and propped it open with a thermos to turn it into Woody’s Lunch Box that dishes out all sorts of tasty meals and old-fashioned soda floats. He completed the area with a classic book and toys strewn about, along with items from his lunch box.