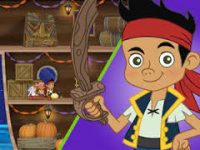 On Disney Junior’s Jake and the Never Land Pirates, follow Jake, Izzy, Cubby and their parrot Skully as they board their ship Bucky and sail from their hideout on Pirate Island for a treasure hunt adventure against Captain Hook and Smee.  Be it a skateboard, a guitar or a prized seashell, Captain Hook will do anything to get his hands on the treasure, but Jake invites viewers to use teamwork, problem-solving and physical activity to reclaim their treasure, earning gold doubloons for the team treasure chest along the way.