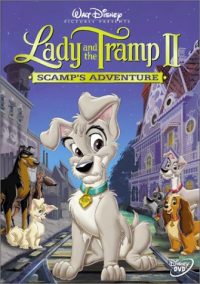 Share the wonder and enchantment as Walt Disney’s beloved classic continues in “Lady And The Tramp II: Scamp’s Adventure,” a heartwarming tale featuring a new generation of hilarious canine characters as well as Jock, Trusty and all the characters you love! Lady and Tramp’s mischievous pup Scamp is always in the doghouse. Now, an itch for freedom is sending him on the ultimate adventure! Scamp joins up with the Junkyard Dogs, a notorious pack that includes his idol, the streetwise Buster, and a sweet and sensible stray named Angel. Will Scamp choose the collar-free life with his new pals or embrace the pampered life he had at home? With nonstop laughs and paw-tapping songs, “Lady And The Tramp II: Scamp’s Adventure” is a new breed of Disney fun your whole family will love!