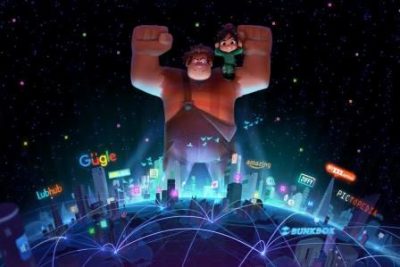 Ralph Breaks the Internet: Wreck-It Ralph 2 leaves Litwak’s video arcade behind, venturing into the uncharted, expansive and thrilling world of the internet—which may or may not survive Ralph’s wrecking. Video game bad guy Ralph (voice of John C. Reilly) and fellow misfit Vanellope von Schweetz (voice of Sarah Silverman) must risk it all by traveling to the world wide web in search of a replacement part to save Vanellope’s video game, Sugar Rush. In way over their heads, Ralph and Vanellope rely on the citizens of the internet—the netizens—to help navigate their way, including a webite entrepreneur named Yesss (voice of Taraji P. Henson), who is the head algorithm and the heart and soul of trend-making site “BuzzzTube.” Directed by Rich Moore (“Zootopia,” “Wreck-It Ralph”) and Phil Johnston (co-writer “Wreck-It Ralph,” “Cedar Rapids,” co-writer “Zootopia,”), and produced by Clark Spencer (“Zootopia,” “Wreck-It Ralph,” “Bolt”).

Update 6/4/18: We have a new Wreck-It Ralph 2 Trailer! Here is a quick description of what we are about to see from the Disney release:

In a scene highlighted in the new trailer, when Vanellope finds herself surrounded by Disney princesses, she’s surprised to learn that she actually has a lot in common with them. The scene features several of the original princess voices, including Auli‘i Cravalho (Moana), Kristen Bell (Anna in Frozen), Idina Menzel (Elsa in Frozen), Kelly MacDonald (Merida in Brave), Mandy Moore (Rapunzel in Tangled), Anika Noni Rose (Tiana in The Princess and the Frog), Ming-Na Wen (Mulan), Irene Bedard (Pocahontas), Linda Larkin (Jasmine in Aladdin), Paige O’Hara (Belle in Beauty and the Beast) and Jodi Benson (Ariel in The Little Mermaid).

Update 9/20/18: We have another trailer as the movie debut nears. Have a look:


Update 10/22/18: Here is another special look at the adventures of Ralph and Vanellope

“There Is No Track”