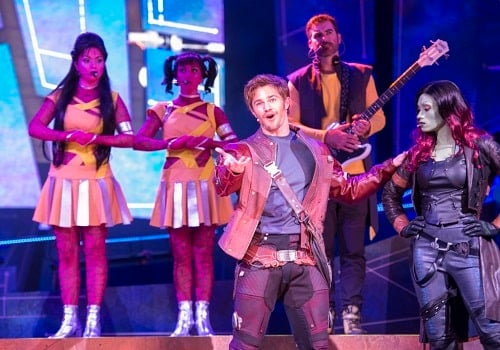 Disney has been working overtime lately to bring more of it’s intellectual property into Disney World parks. Of course, Marvel is a tricky one, since Universal Orlando already held the rights to some of Marvel’s most popular characters prior to the Disney purchase. This means, at least for their Florida park, Disney must focus more on other Marvel properties like Guardians of the Galaxy.

So what the heck is it?

Guardians of the Galaxy – Awesome Mix Live! is a stage show on the America Gardens Theater stage. It pairs characters from the hit movie franchise with a live band, who plays music which is supposed to come from Star Lord’s mix tapes. Here is a quick peak at the show:

Guardians of the Galaxy – Awesome Mix Live! runs daily through August 19th in the America Pavilion of Epcot’s World Showcase.