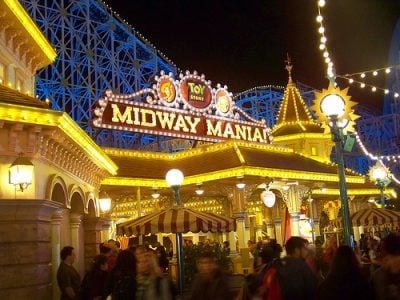 On Disneyland’s Toy Story Midway Mania ride, become an honorary toy as you compete in target-themed games hosted by friends from the Toy Story movies.

Andy’s Room
Andy’s got some new games—and the toys are taking over. Join them! Hop in a swiveling carnival car and pass through the portal to the rowdy 4D world of toys. Grab your Spring-Action Launcher and take aim at targets!

Practice Game
Warm up for the real competition with some practice. Woody and Rex show you how. Take aim as much as you want—and keep in mind, some targets are worth more points than others.

Now… Let the midway mayhem begin! Compete for the high score on these games: