Here is everything you need to know about the amazing Disney Pixar movie Finding Dory including casting, reviews, fun facts and more. I hope you find this listing informative and helpful! 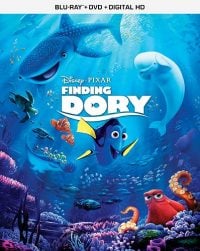 From the Academy Award®–winning creators of Disney•Pixar’s Finding Nemo (Best Animated Feature, 2003) comes an epic undersea adventure filled with imagination, humor and heart. When Dory, the forgetful blue tang (Ellen DeGeneres), suddenly remembers she has a family who may be looking for her, she, Marlin (Albert Brooks) and Nemo (Hayden Rolence) take off on a life-changing quest to find them…with help from Hank, a cantankerous octopus; Bailey, a beluga whale who’s convinced his biological sonar skills are on the fritz; and Destiny, a nearsighted whale shark! Dive into the movie overflowing with unforgettable characters, dazzling animation and gallons of fun!