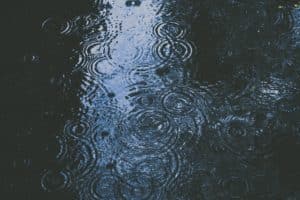 When it comes to planning a trip to Disney World, many people focus on the perfect weather and sunny skies. But what happens when Mother Nature has other plans and it starts to rain during your visit? If you are staying in central Florida for a week, you are bound to get at least one, if not more, midday downpour. They generally strike in the mid-late afternoon and pack quite a wallop.

Don’t let a little rain dampen your spirits! Disney World has plenty of indoor attractions and activities that are perfect for a rainy day. Here are 10 Disney World attractions you should check out when the weather isn’t cooperating.

There are two tracks you can take when the rain starts to fall at Disney World. The first is to pack a poncho in the morning and continue to hit the indoor rides despite the storm. A simple dollar store poncho will protect you enough to allow you to keep moving around the parks. You will find that a majority of park-goers are not nearly as adventurous. My son and I love to take advantage of this and see how many, normally busy, rides we can get in before the sky clears up. Of course, you probably won’t be able to get in a ride on Seven Dwarfs or Big Thunder while it is pouring out, but the crowds at normally packed rides like Peter Pan, Space Mountain and Haunted Mansion tend to thin out when the rain starts.

If you are less adventurous and want to keep in a direr place to wait out the storm, you are in luck. The good news is that central Florida storms don’t last all that long and there are a ton of places in each of the Disney World parks that offer a bit of shelter from the storm. Here are a few:

So that’s it for attraction suggestions. Of course, you can park yourself in a quick service restaurant during a storm and to that end, I can’t advocate enough for the new Connections Café in Epcot, which is spacious, offers a ton of charging ports and has amazing food.

Also, a great way to wait out the rain and get some unbelieve bale views (albeit behind plexiglass windows) of the lagoon, the area resorts and Bay Lake is to hop on the monorail and do a loop or two. If you are adventurous, you can hop off of the resort or express monorail and on to the Epcot monorail if you really want to stretch out your loop. The transfer between the Magic Kingdom and Epcot monorails is pretty much covered so you wont get soaked. 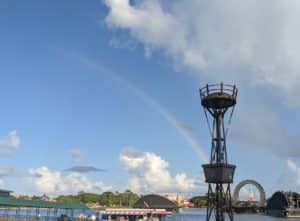 I can’t believe I am giving this away, but my absolute favorite spot to wait out a storm (If we arent taking the ‘poncho challenge’ mentioned earlier) is to get some hush puppies and sit in the area of Columbia Harbour House that overlooks the walkway between Fantasyland and Liberty Square. There is almost never a soul in this area and it is a peak people watching location. It also gives you a big rush of nostalgia, so if you are a Disney World lifer, it is a great somewhat-hidden  ‘happy place.’

No matter the weather, Disney World offers plenty of indoor attractions and activities to keep you entertained. So don’t let a little rain dampen your spirits, instead use it as an opportunity to check out some of these amazing indoor experiences that Disney World has to offer!