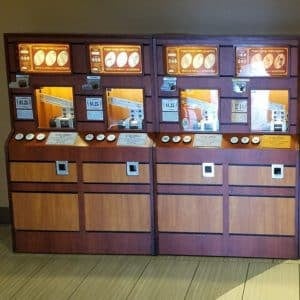 Pressed pennies, also known as elongated coins, are a popular souvenir at Walt Disney World and other theme parks. They are created by inserting a penny (or other coin) into a machine, which then uses a press to flatten the coin and emboss it with a design.

These designs often feature popular Disney characters or scenes from Disney movies and attractions. They are a popular collectible and can be found in several locations throughout the Walt Disney World resort, including the parks, hotels, and Disney Springs. These machines can be found in various locations throughout the park, and many guests like to collect pressed pennies as a reminder of their visit to Walt Disney World. Some guests even make it a mission to collect all the available designs.

Where to find pressed penny machines in Disney World:

Are you a Disney pressed penny collector? The good news is there are a ton of machines across the resort inside its many theme parks and hotels. The bad news is they are quite spread out although, unless you are a completionist, you can build your collection pretty quickly by just visiting a few parks.

Here is a comprehensive rundown of where you can find pressed pennies throughout Disney World.

(Please note: these locations are as of January 2023 and do change occasionally)

That’s a quick rundown of what Disney pressed pennies are and where to find them. I hope you found this post helpful and happy hunting!