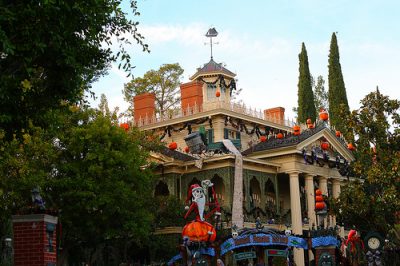 Disneyland’s Haunted Mansion is a fun and spirited tour…

Edge into a dimly lit foyer and climb into a gloomy Doom Buggy for a supernatural journey through a tangle of frightful chambers. Blending giggling ghouls with things that go bump in the night, this classic attraction promises to send chills up and down your shivering spine.

Ethereal Inhabitants
Once an abandoned residence in the center of New Orleans Square, the Mansion has been home to 999 unearthly specters since August 9, 1969, including:

Happy Haunting Grounds
Over 15 rooms are waiting to be explored within the darkened, spirit-infested abode, including: