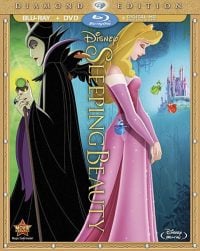 Awaken your senses to the majesty of “Sleeping Beauty”, Walt Disney’s classic fairy tale. See more than you’ve ever seen before through the magic of state-of-the-art technology, and experience this groundbreaking film restored beyond its original brilliance, in the way Walt envisioned it – pristine, beautiful, utterly breathtaking. It will transform your home into a fantastic world your family will want to experience again and again.