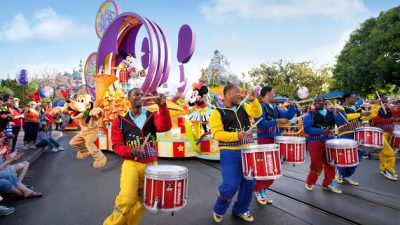 Mickey’s Soundsational Parade is a fun street show and parade featuring Mickey Mouse at Disneyland Park. Here are the details:

Mickey strikes up the band and leads the way with a syncopated drum line. Colorfully costumed musicians, energetic dancers and many of Mickey’s friends follow to amplify the fun with twinkling cymbals, steel drums and bold percussion.

Each fantastic float has its own unique musical style, like crowd-pleasing Bollywood and South American rhythms.

Best of all, you’re encouraged to join the celebration for a giant jam session!

Mickey leads this rockin’ parade, followed by many of his friends, including some royal Disney Princesses.

Character appearances are subject to change without notice.