Here is everything you need to know about Walt Disney World’s Magic Kingdom’s Festival of Fantasy Parade including history, fun facts, photos and more. I hope you find this listing informative and helpful! 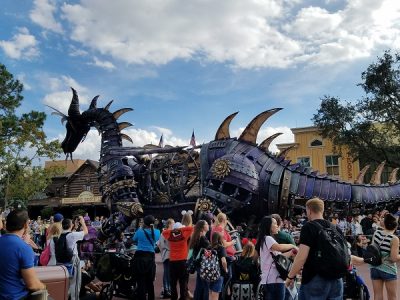 At the Festival of Fantasy Parade, celebrate the spirit of Disney as Magic Kingdom park comes alive with music and dance during a tribute to the tales of Fantasyland.

Celebrate the stories you love with a magical mix of floats, costumes and original music.

Paying homage to the unbridled magic and vivid pageantry of Fantasyland and its many inhabitants, the Disney Festival of Fantasy Parade is a thrilling sight-and-sound spectacular that winds its way through the streets of Magic Kingdom park each afternoon.

Be a part of this grand gala, which includes spectacular, state-of-the-art floats starring Characters from some of your favorite Disney stories, plus colorfully costumed performers on stilts, pendulums and swings.

During the fantastical procession, be on the look-out for:

It’s a dazzling sight unlike anything you’ve even seen or heard, and a festival of fun for everyone! (source)