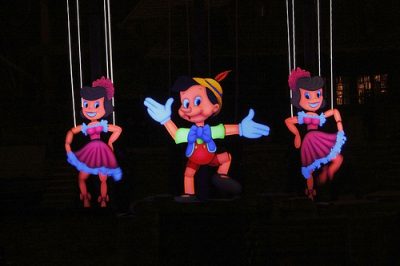 Magical effects erupt against the night sky while Disney Characters appear—both in person and as visions on the water.

Join the Reverie
While Mickey conducts a breathtaking water show on the Rivers of America, his active imagination begins to grow.

With the wave of his hands, he conducts whimsical scenes from Fantasia across enormous screens of water—while brilliant sparks burst overhead.

Pink elephants, swashbuckling pirates, princesses and more surprisingly appear on and around the Pirate’s Lair on Tom Sawyer Island.

When Mickey is suddenly pulled into the Magic Mirror, his dream takes a dark turn. The forces of evil come out of the shadows as the Evil Queen invokes some of Disney’s most dastardly villains—including an impressive, 45-foot, fire-breathing beastly dragon!

Will Mickey triumph over this terrifying beast from the depths of his nightmare?

Don’t miss the return of this treasured nighttime spectacular!