Here is everything you need to know about Walt Disney World’s Magic Kingdom’s extinct Remember the Magic Parade including history, fun facts, photos and more. I hope you find this listing informative and helpful! 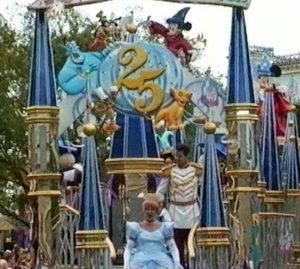 The Remember the Magic Parade was Disney World’s 25th anniversary parade that ran in the Magic Kingdom at the close of the last century. It featured a number of the characters from movies of the Disney movie renaissance like Aladdin, The Lion King and The Little Mermaid, along with the usual Disney parade cast of characters.